Need I say more?  The title of this post alone is enough to make anyone want to try this.  I could just post the recipe and be done.  But no, I'm still going to post photos too and step by step instructions. :)  Time to get your taste buds tingling!

This is the best cinnamon roll recipe I've ever tried.  Throughout the years I've tried a handful of them - the quick bread types.  You know, where you just use self-rising flour.  Making it with yeast is frequently spoken of as if it's very arduous.  And yes, this recipe takes a few hours from beginning to end.  It's not quick.  At all.  But some things - take that back, most things turn out better when they are not rushed.  So today, we are sloooowing it down and taking our time.

The first step is of course to make the dough.  Very simple.  Once that is mixed together, it will look something like this: 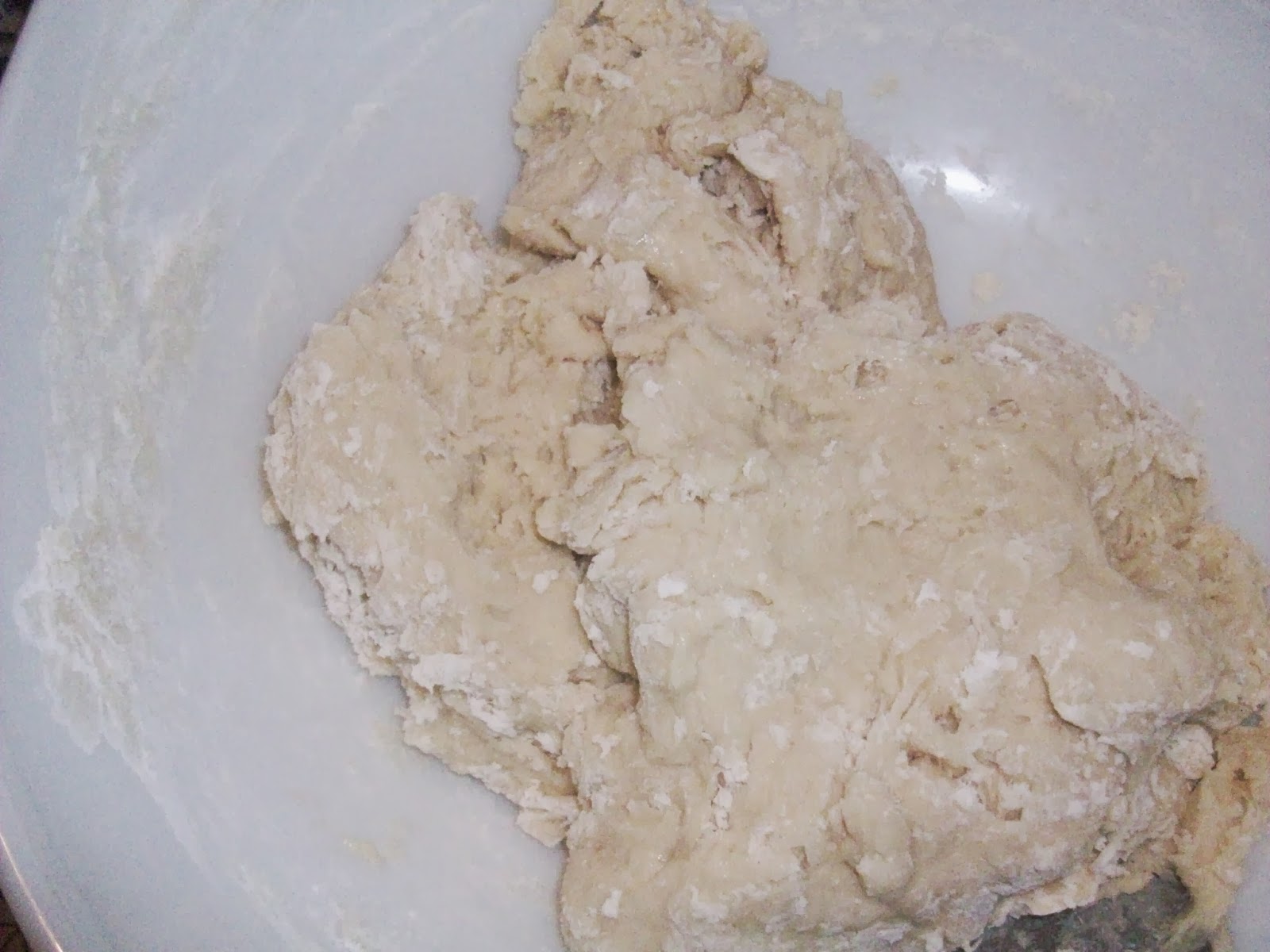 Having prepared the dough, you will then turn it out onto a lightly floured surface and knead it for 5-10 minutes.  This is the really fun part!!! :)  One of the things I love so much about cooking is how much I get to use my hands to shape, mix, create.  This is a very hands-on recipe and that's one reason I love it so much!  After kneading, you will place the dough in a greased bowl. 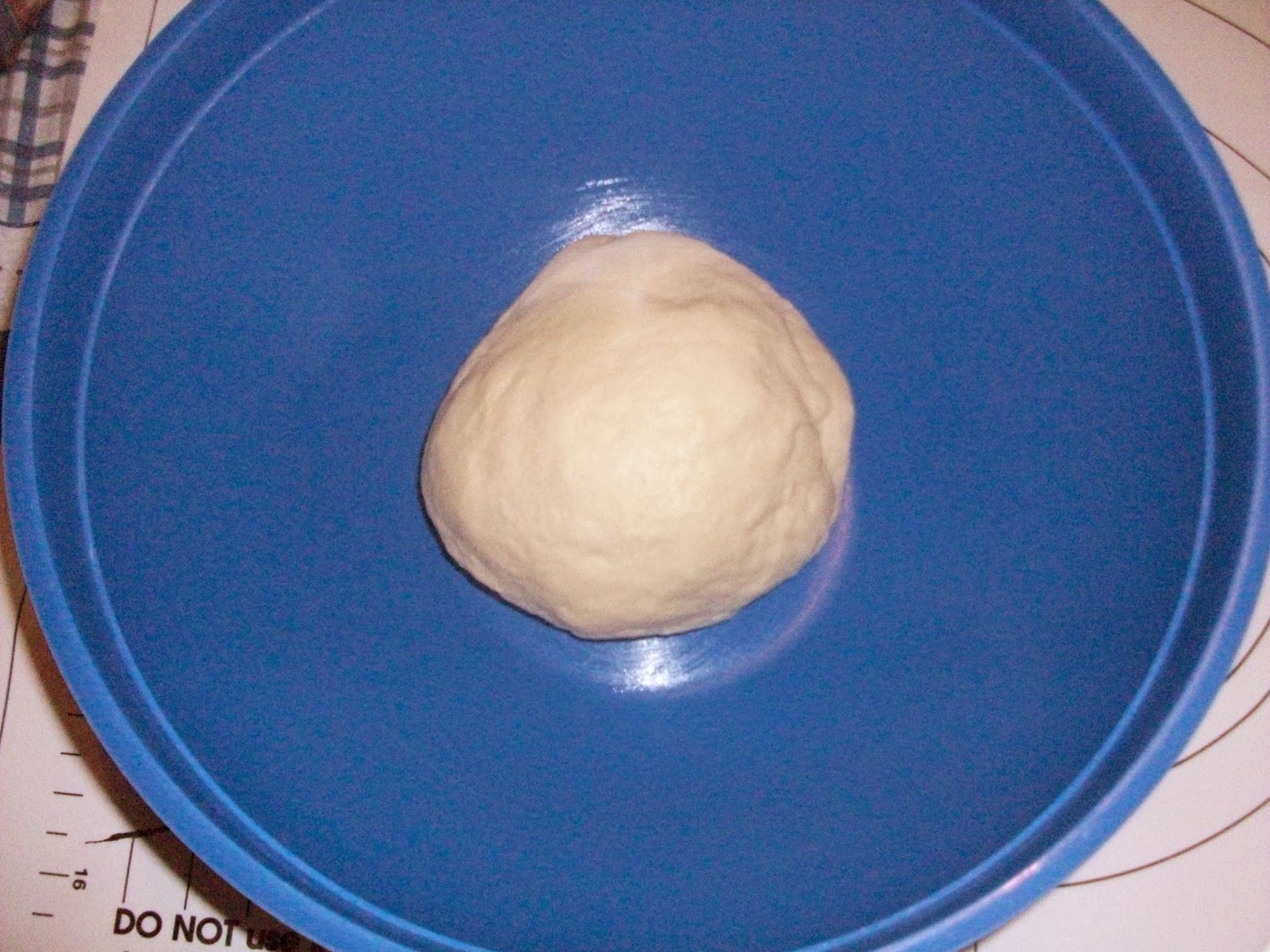 Cover it with a towel and let it rise to double the size.

While the dough is rising, head to the griddle and get the bacon sizzlin'!  The first time I made these, I cooked the bacon in the oven thinking it would save time and mess.  It did, but the bacon didn't taste nearly as good as it does on the griddle.  There was definitely a difference.  So this time I cooked it on the griddle.  Again, things turn out better when they are not rushed. :)

Mmmm... I can just smell it and hear that popping and cracking and sizzling.  Good stuff. 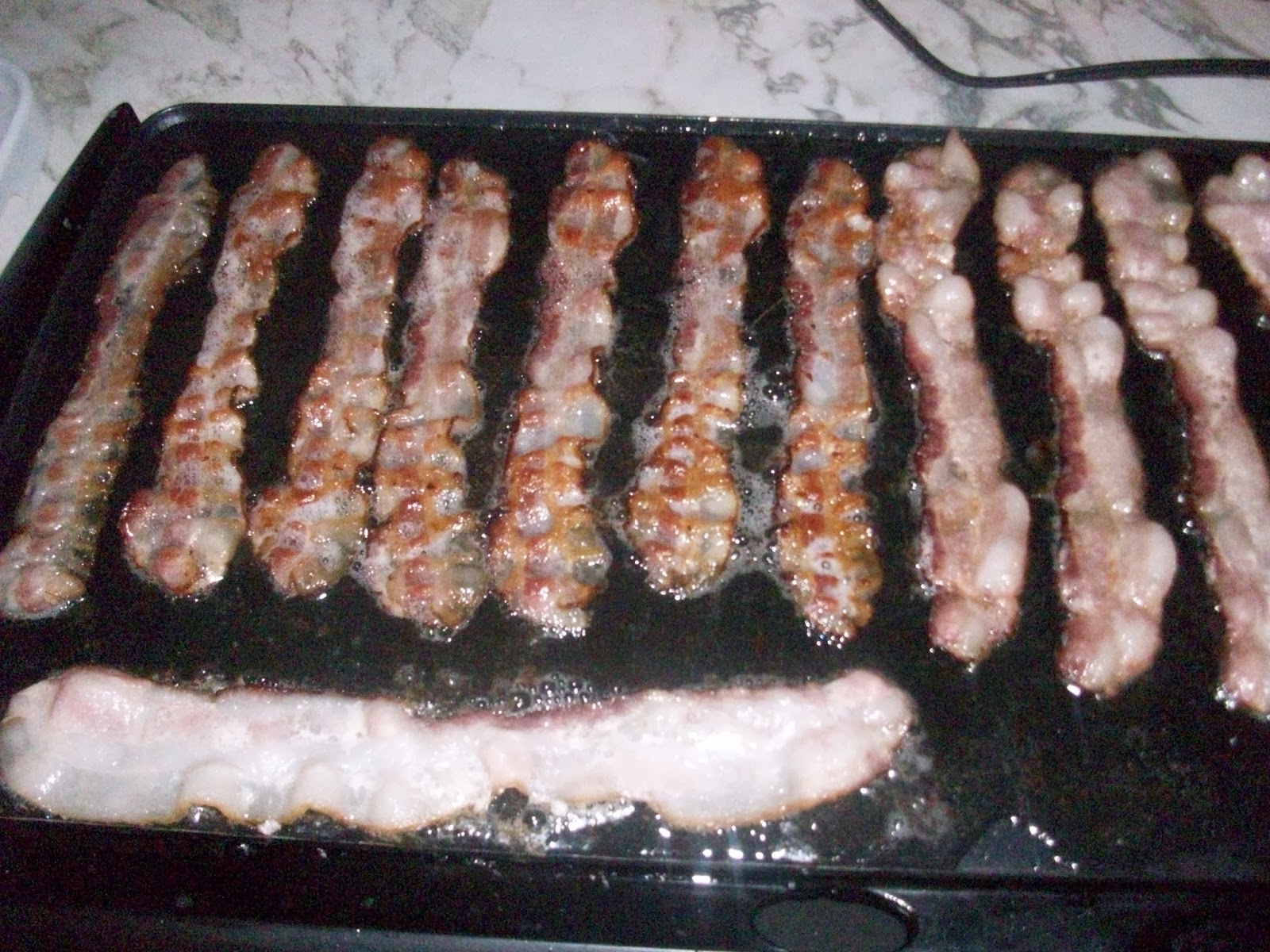 Feast your eyes on that!! 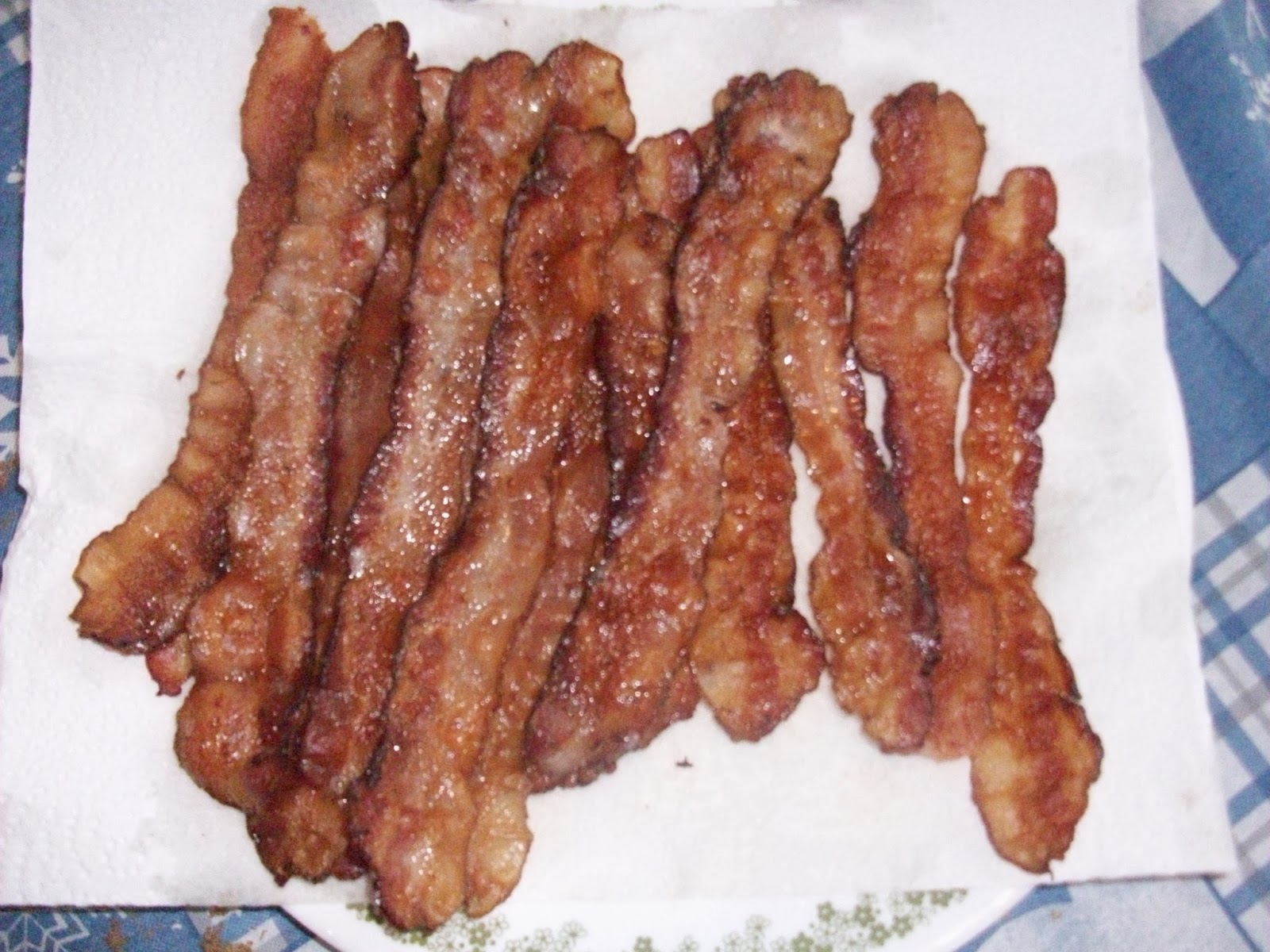 Let the bacon cool a couple of minutes; then you can chop it up and get these yummy little bacon bits. 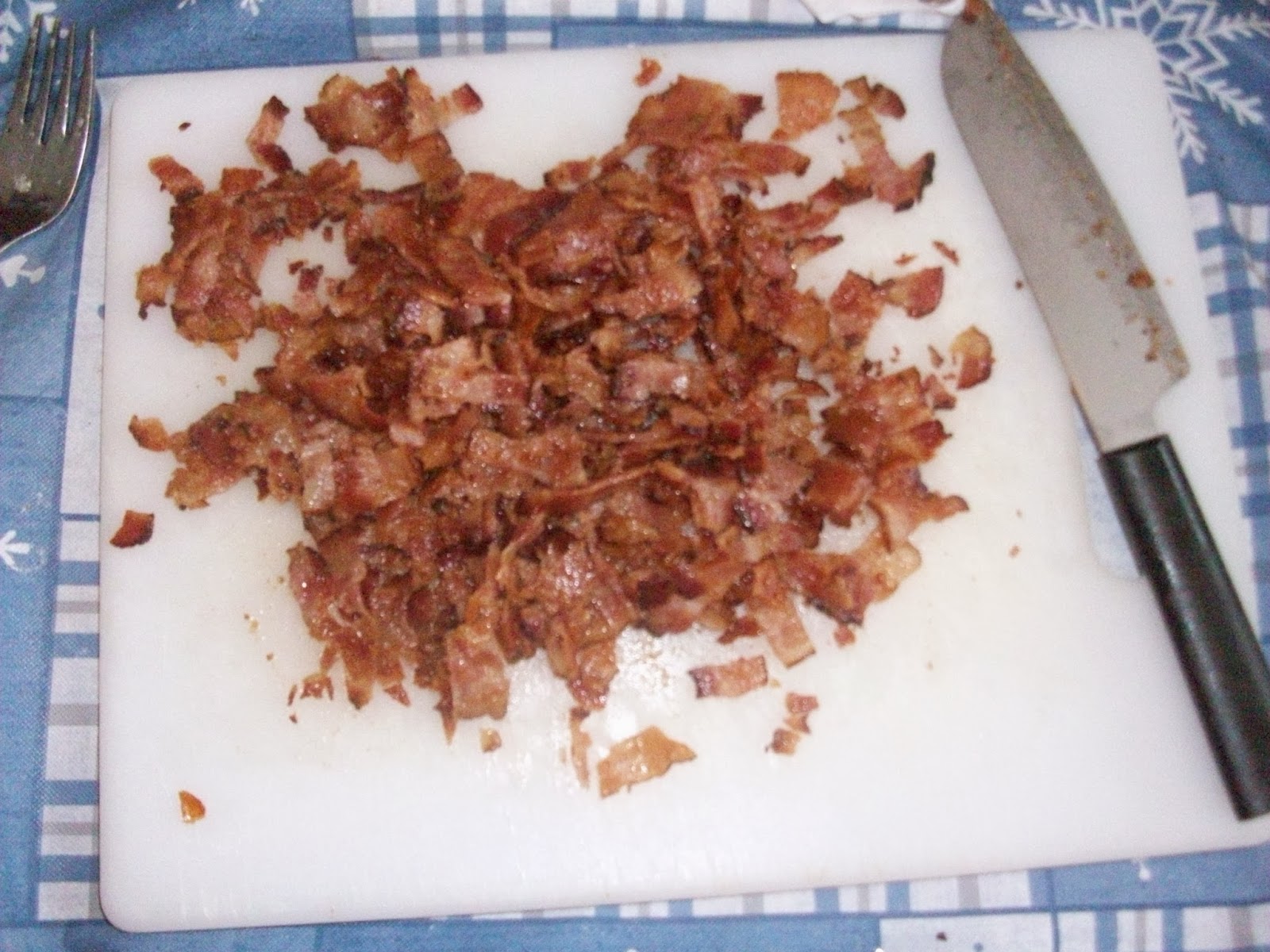 By the time, you've finished with the bacon and cleaned up a little, the dough will probably have doubled in size and be ready to go. Ain't it purty? Turn it out on a floured surface again.  Proceed to roll out to a 9" x 15" rectangle.  This is when a pastry mat is really nice because it has the measurements on it! 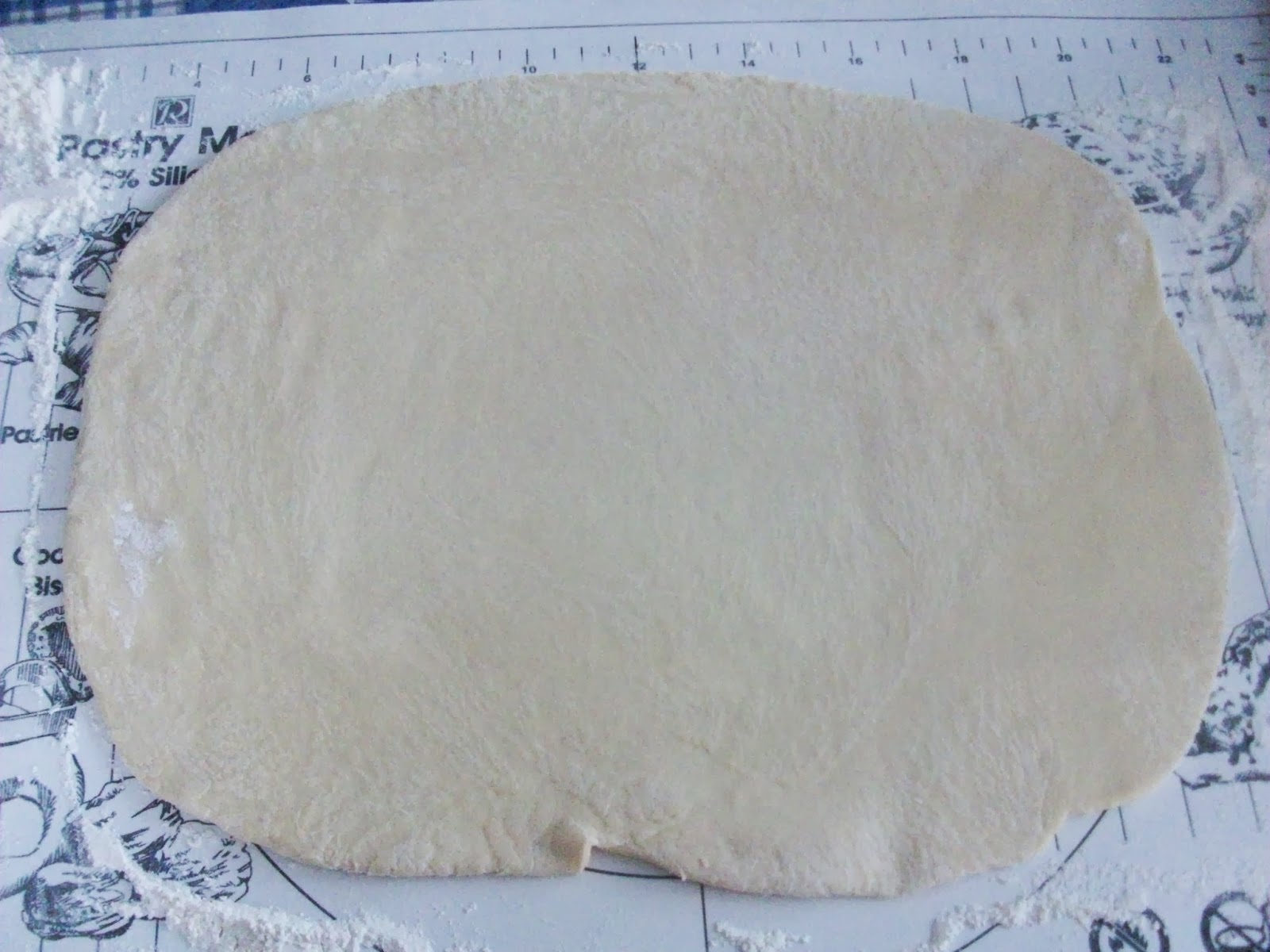 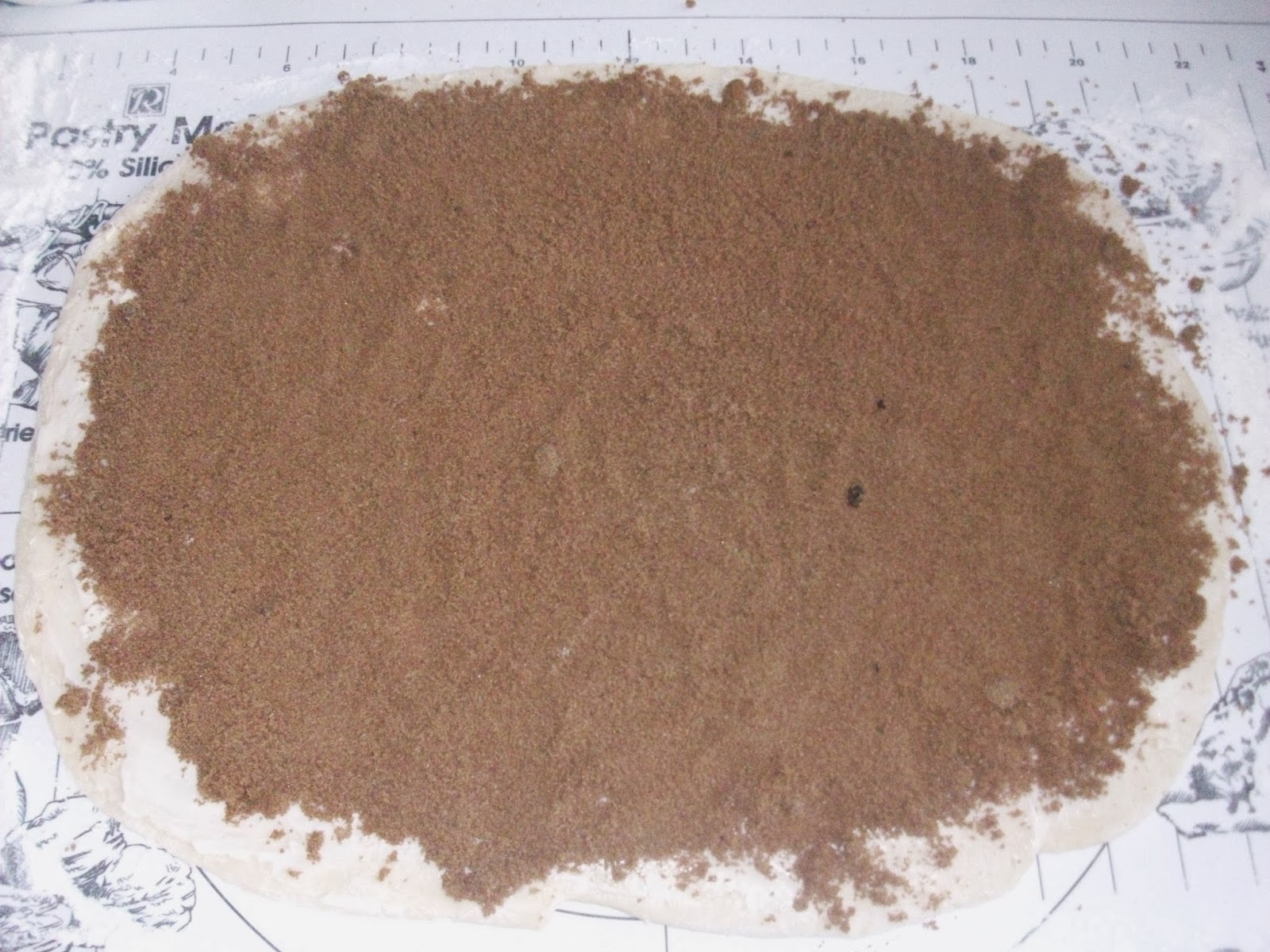 I've found that brown sugar works better than granulated sugar.  Brown sugar is more moist so it really sticks to the butter and the dough better, really sinks in there.

Time for the bacon!  Try to make sure it's spread out enough that once rolled and cut, every roll will have some bacon in it.  After the bacon is on, lightly pat everything down to help it all stick better.  I highly recommend using a whole pound of bacon (or even a pound a half!.  I did not use a whole pound here - I set aside six pieces for my family to enjoy - but I will be using a whole pound next time. 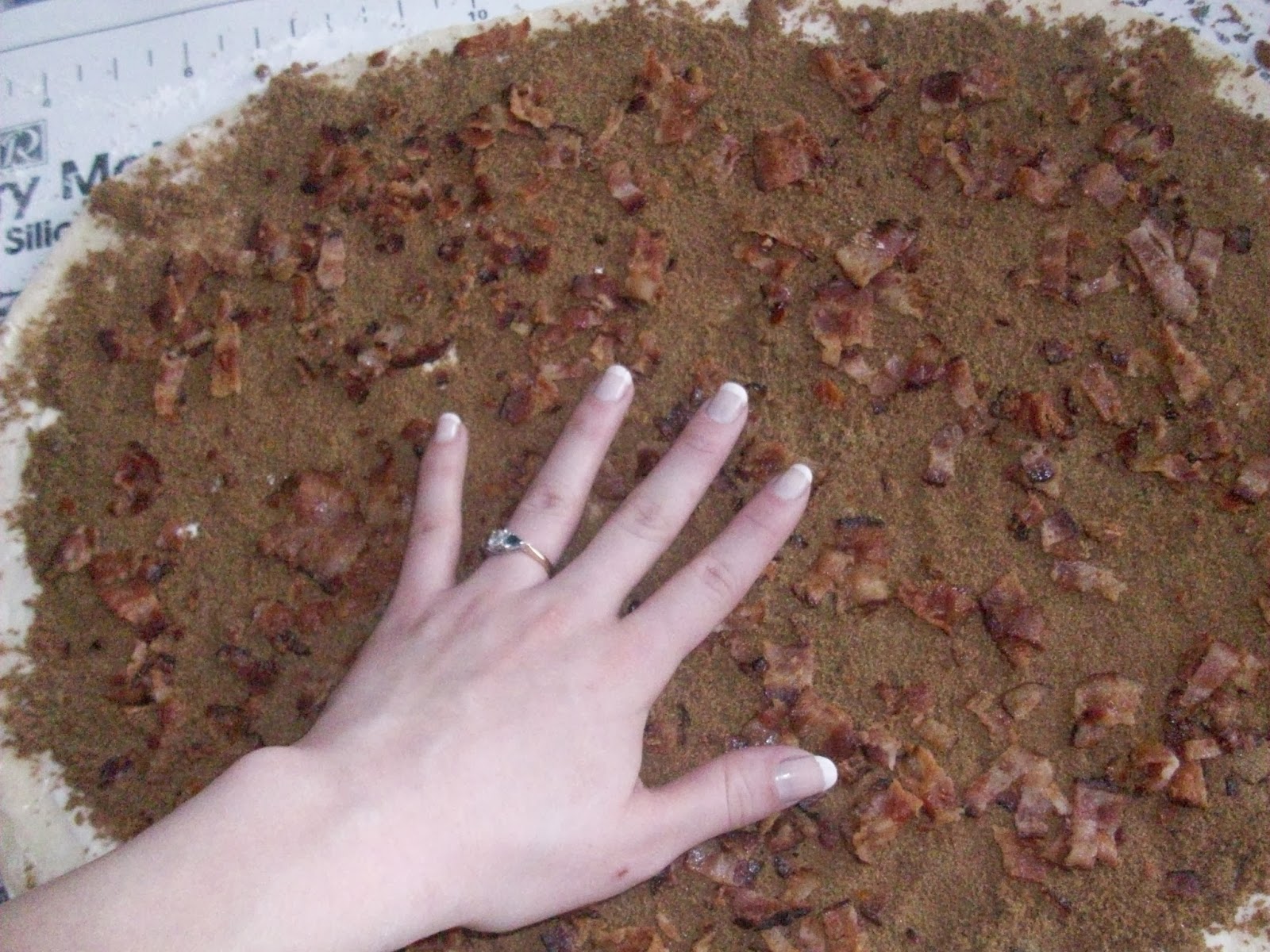 At this point, it's time to start prepping the pan.  Use some more softened butter to spread - generously - all over the pan.  You can use either cake pans or a brownie pan for this.  Once the butter is slathered on, sprinkle with sugar - brown or granulated. 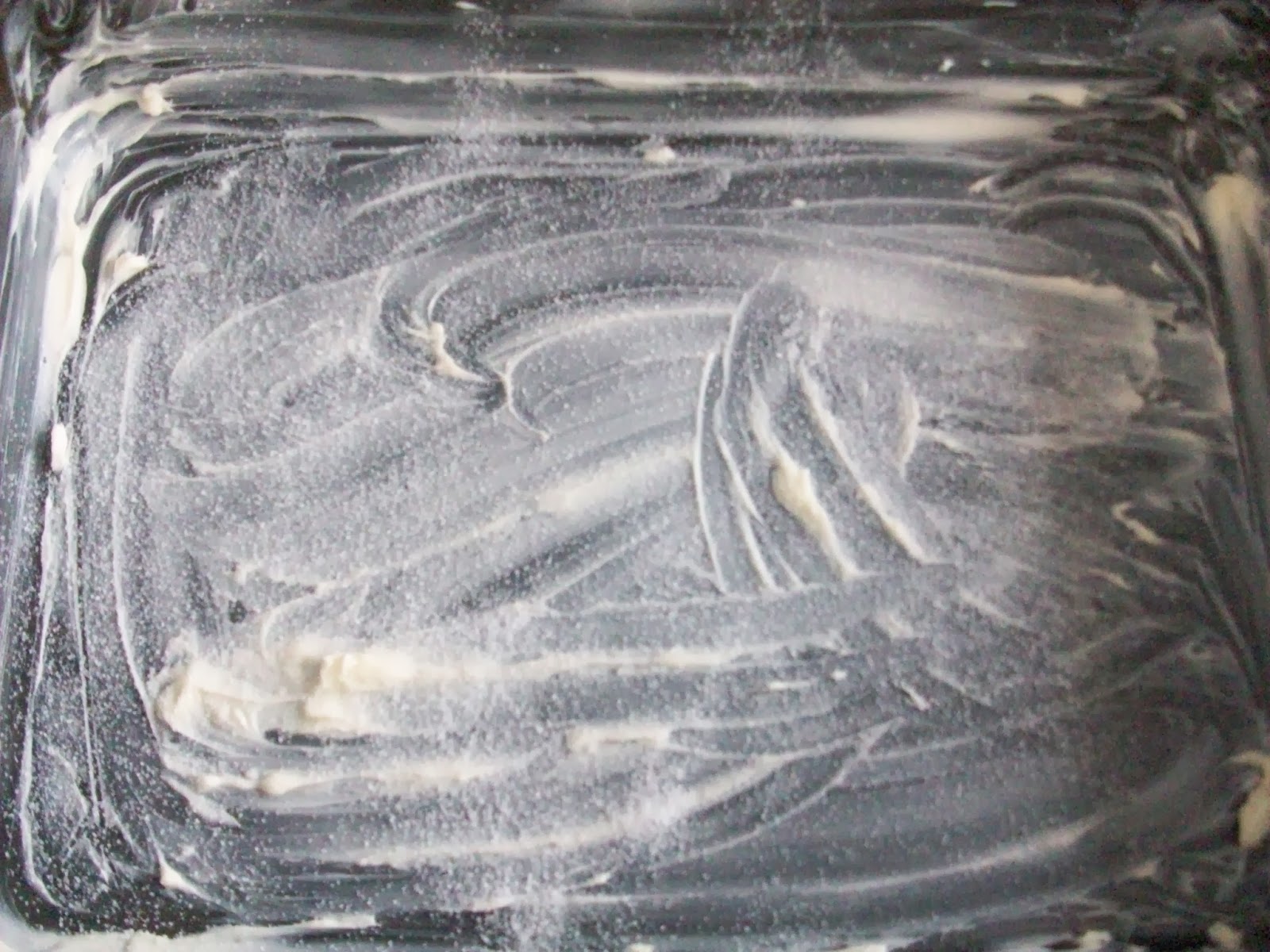 Then you can turn your attention back to the rolls.  Begin rolling at one end the way you would roll up a sleeping bag.  Roll it tight and give a little pull with each roll to make sure it stays together well.  Once you get to the end, pinch the dough together to keep it secure. 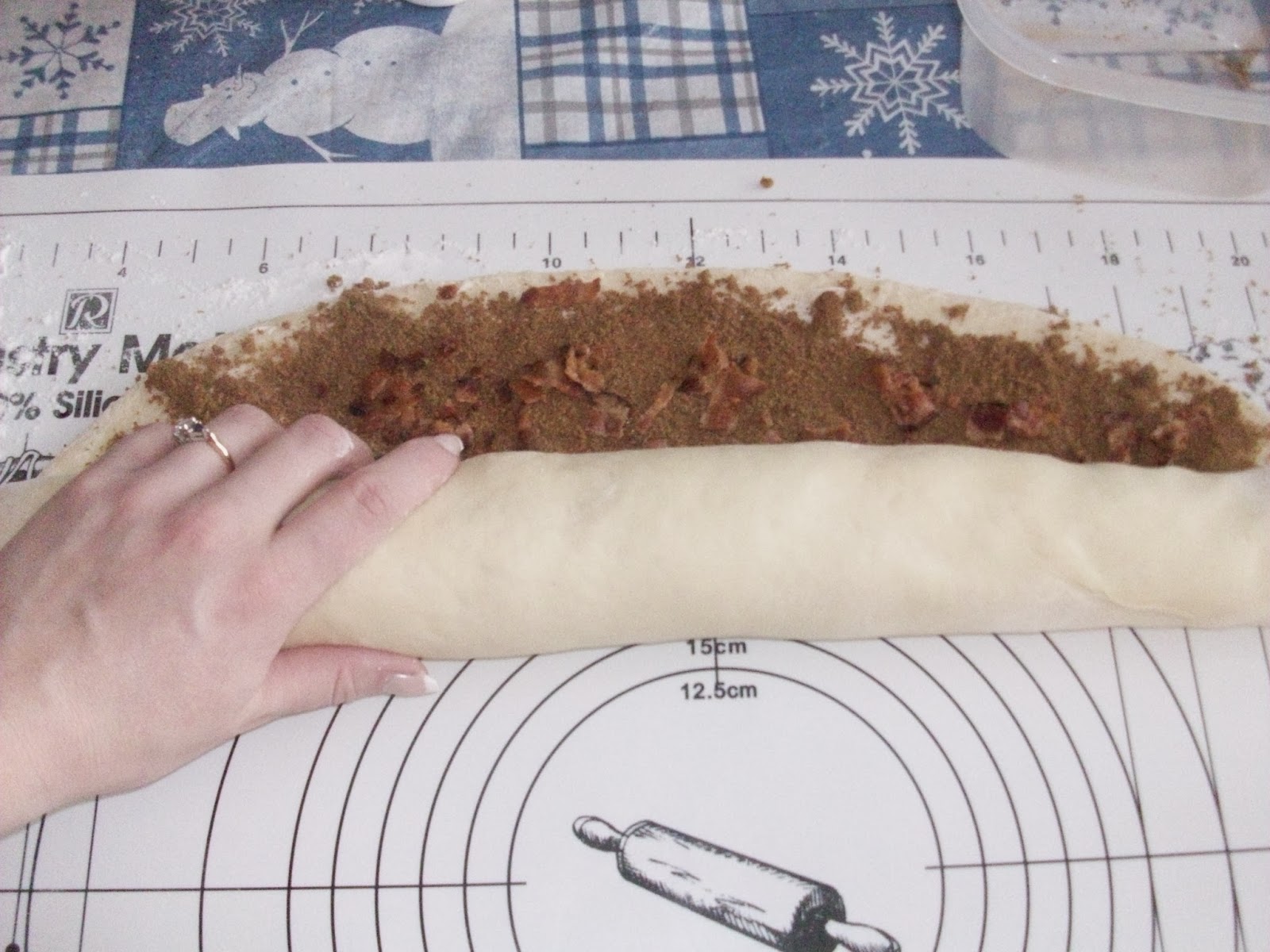 Cut the long roll into about 1 inch wide rolls.  I got 16 rolls out of this.  Of course, that can vary depending on how big or small you want them to be.

Place the rolls in the pan and then cover them with a towel.  Let them sit for 45 minutes to double in size.  Once doubled, place them in a 350 degree oven for about 30 minutes. 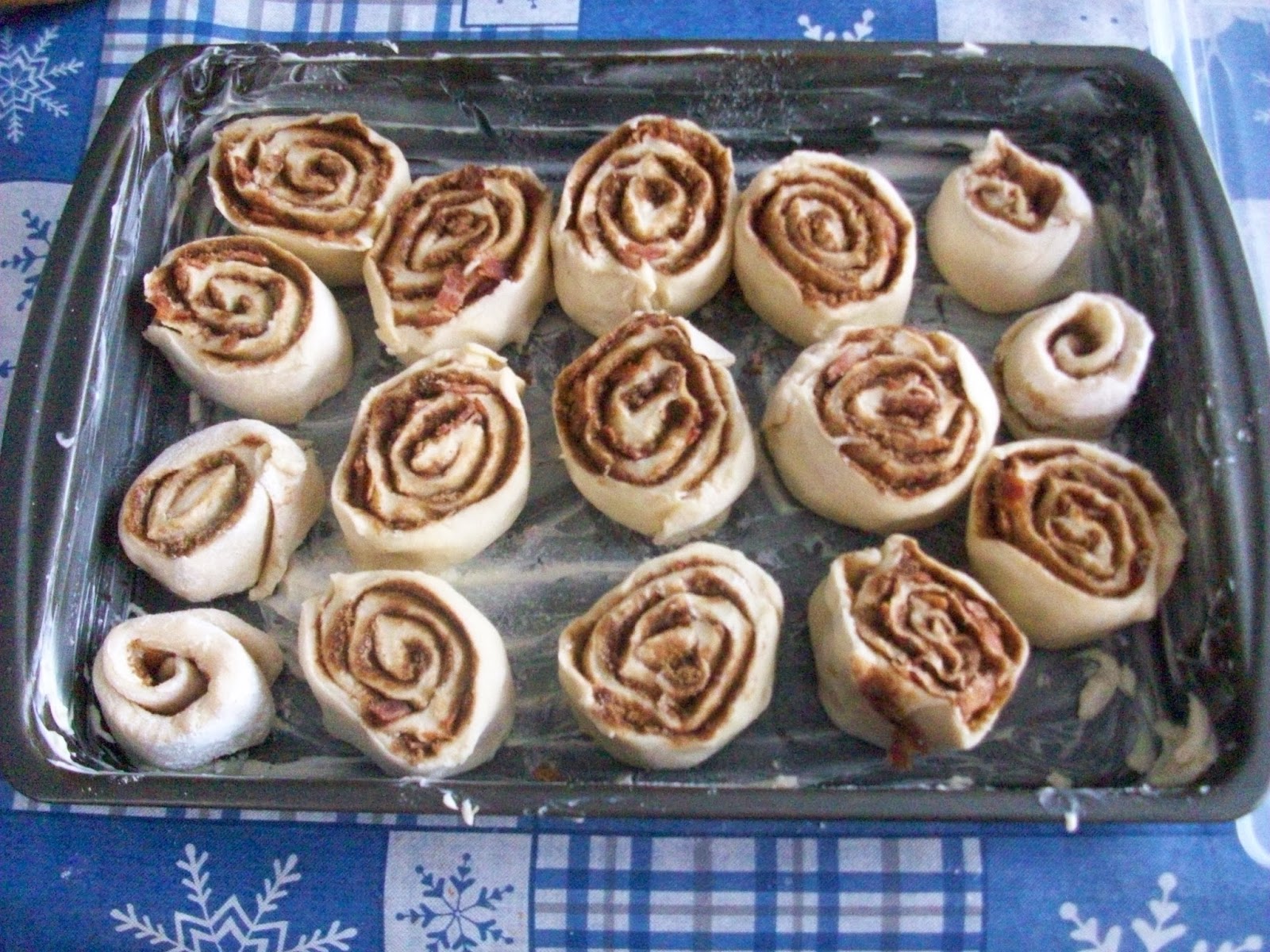 This is what I got at the end of the cooking time. 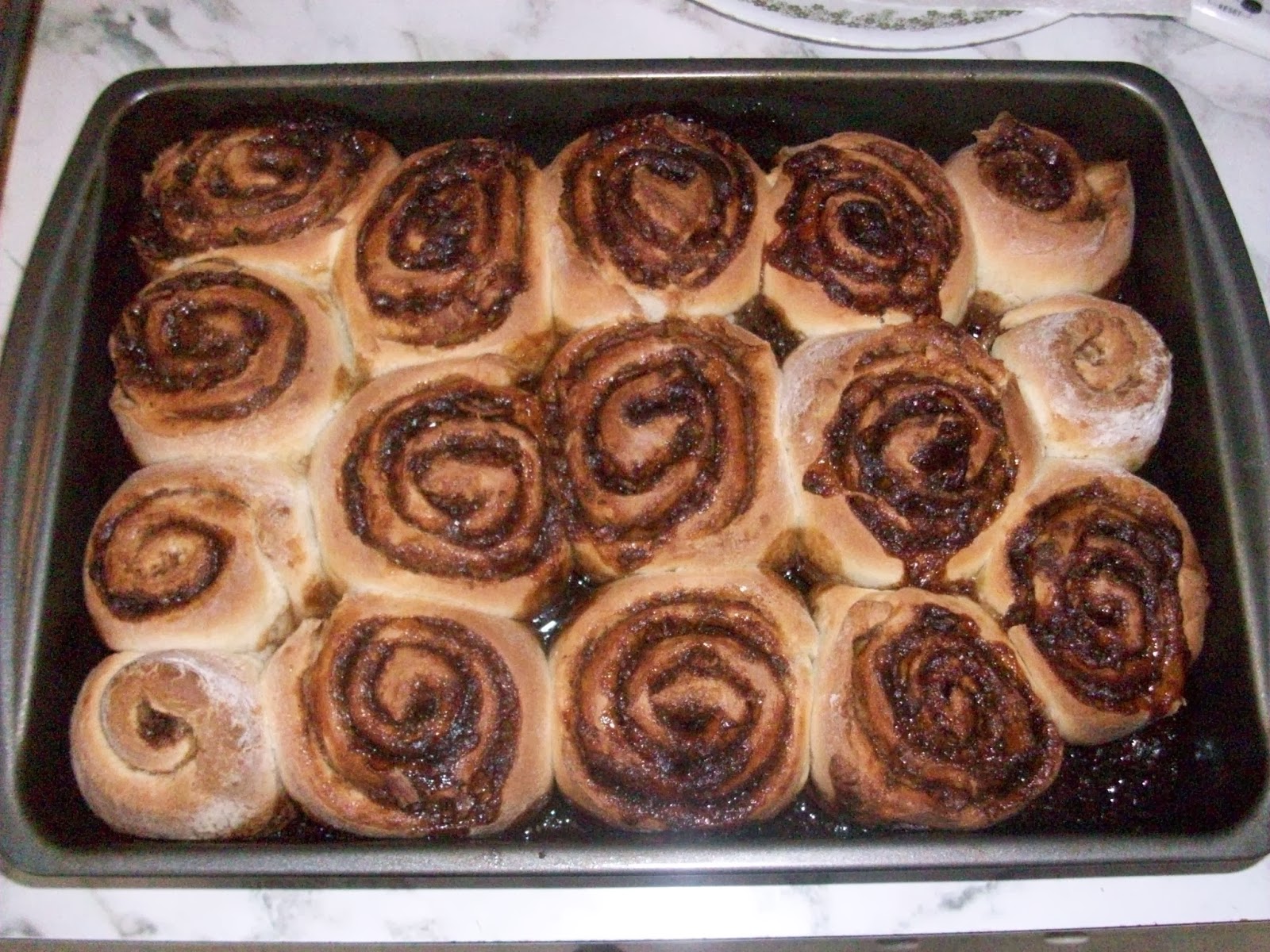 If that doesn't make your mouth water, I don't know what will. 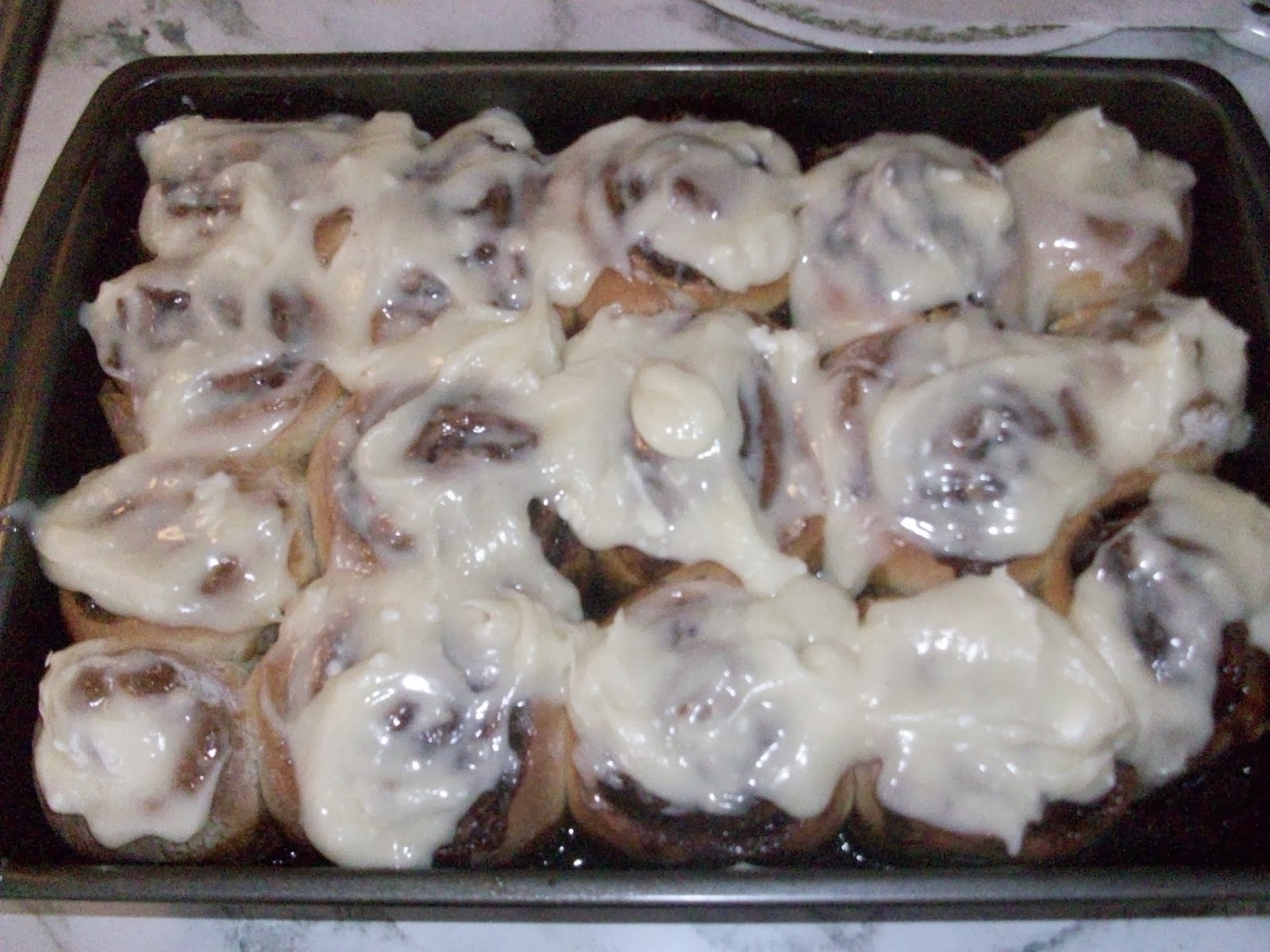 Now go eat on.  Close your eyes, lean back, and savor that delicious salty-sweet combo.  Worry about the dishes and mess later.  Take your time eating it.  After all, we're slowing it down today. :) 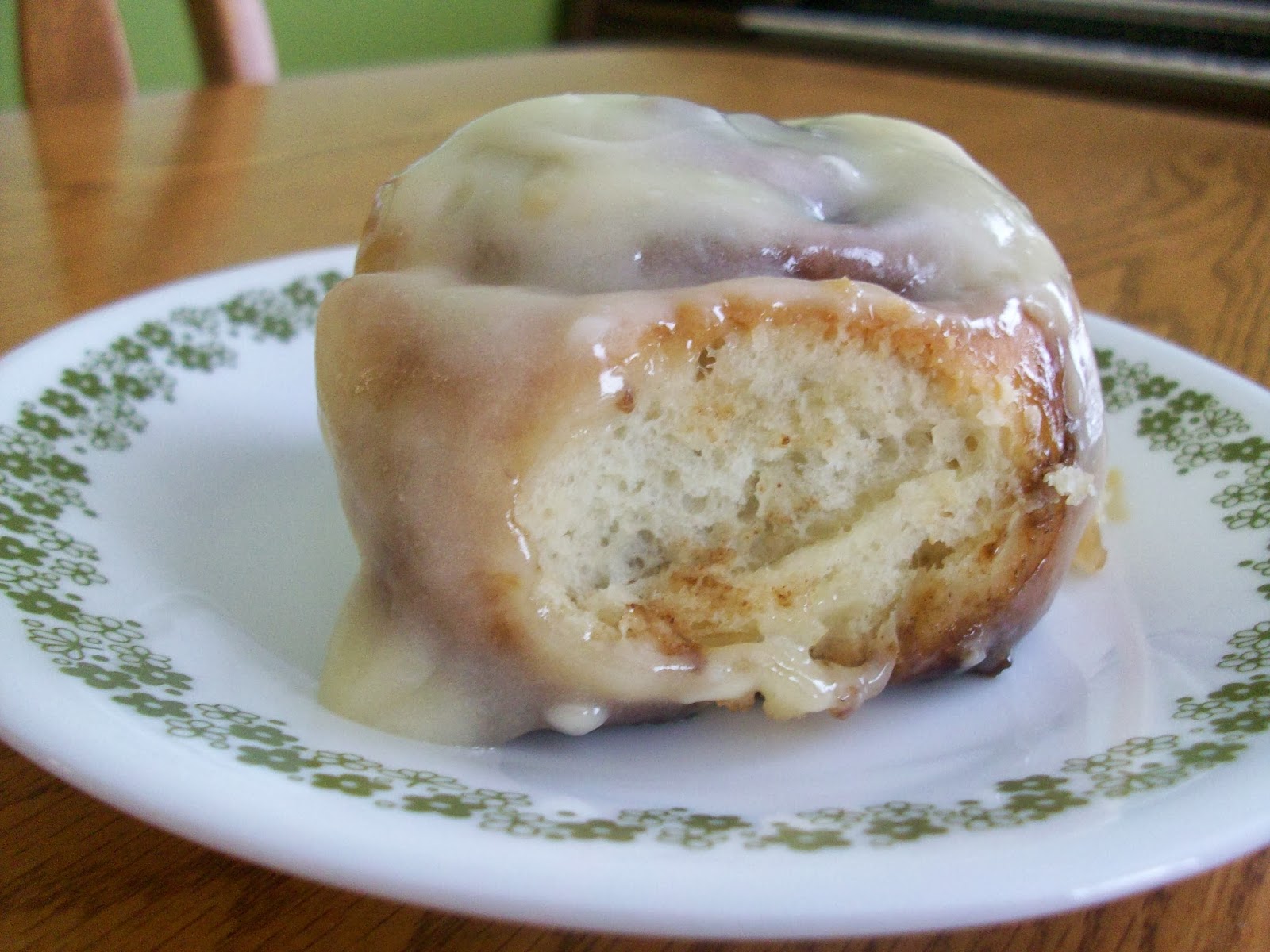 Heat oven to 350 degrees F.
(1) In a small bowl, dissolve yeast in warm water and set aside. In a large bowl mix milk, sugar, melted butter, salt and egg. Add 2 cups of flour and mix until smooth. Add yeast mixture. Mix in remaining flour until dough is easy to handle.

(2)Knead dough on lightly floured surface for 5 to 10 minutes. Place in well-greased bowl, cover and let rise until doubled in size, usually 1 to 1 1/2 hours.When doubled in size, punch down dough. Roll out on a floured surface into a 15 by 9-inch rectangle. Spread 2/3 stick softened butter on the dough. Mix brown sugar and cinnamon and sprinkle over buttered dough. Sprinkle with bacon. Beginning at the 15-inch side, role up dough and pinch edge together to seal. Cut into 12 to 15 slices.

(3)Coat the bottom of baking pan with butter and sprinkle with sugar. Place cinnamon roll slices close together in the pan and let rise until dough is doubled, about 45 minutes. Bake for about 30 minutes or until nicely browned. 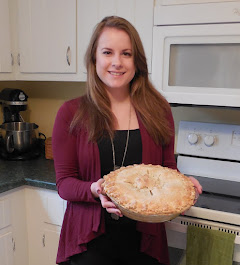 Susanna
Just a simple girl who has an unabashed love for food. Comfort food, desserts, gourmet dishes - it's all here. I invite you to join me in my contemplations, discoveries, and ramblings as I work with "that old oven".